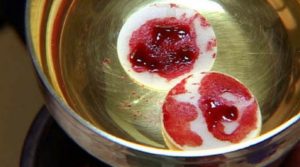 The Eucharistic Miracle in Buenos Aires happened in 1992. After the Mass of Friday May 1, while preparing the Eucharistic reserve, a Eucharistic minister found some pieces of consecrated Host on the corporal. Following what the Church prescribes to do in these situations, the priest had them put in a vessel of water. This was then placed in the tabernacle to wait for them to dissolve. In the following days, several priests went to check it and they realized that nothing had changed.

Seven days later, on Friday May 8, they opened the tabernacle and saw that the Host fragments had become a reddish color that looked like blood. The following Sunday, May 10, during the two evening Masses, several small drops of blood were noticed on the patens with which the priests distributed Communion.

On Sunday, July 24, 1994, during the children’s Mass, while the Eucharistic minister took the pix from the tabernacle, he saw a drop of blood running along its side. On August 15, 1996, during the Mass of the Assumption of the Most Holy Virgin, a consecrated Host had to be placed again in a vessel of water so it would dissolve. A few days later, on August 26, a Eucharistic minister opened the tabernacle and saw that Host had transformed into Blood.

This is the account given by Professor Castañon regarding the Eucharistic Miracle that occurred:

“On August 15, 1996, a faithful received the consecrated Host in his hands to take communion. He let it inadvertently fall to the ground and thought not to pick it up because it seemed “dirty” to him. Another person, more pious, noticed what had happened, picked it up and placed it apart immediately informing the priest, Father Alejandro Pezet. The priest, following the directives of the Church in these circumstances put the Host in a vessel full of water which he placed in the tabernacle awaiting that it would dissolve.”

On August 26 the tabernacle was reopened to get the vessel with the fallen Host. It was observed that it was not dissolved and showed several reddish stains that became larger each day. The priests of the parish went immediately to the Archbishop of Buenos Aires to recount what had happened. It was decided to wait before proceeding with the investigations. In 1999, after the Archbishop was made aware of the fact that I was performing for free these scientific investigations, he entrusted me to take up the case.

On October 6, 1999, I went to Buenos Aires and interviewed the 5 priests’ witnesses of the event who told me that there had been another consecrated Host which had bled in May of 1992. They had put it in distilled water which is the worst way to preserve something and for this I was very concerned. Everyone knows that when one draws blood it is possible to obtain the leukocyte formula (white blood cells). In blood there is a variety of white blood cells with specific characteristics. The priests, in the first miracle, had asked one of their lady parishioners who was a chemist to analyze the bleeding Host.

She discovered that it was human blood and that it presented the entire leukocyte formula. She was very surprised to observe that the white blood cells were active. The lady doctor could not however do the genetic examination since at that time it was not easy to perform it. I brought a sample from the 2 Hosts which had bled, before the Archiepiscopal notary who certified the legality of that action, as requested by the authorities of the Church in Argentina. I would like to point out that before inviting me, the then Archbishop of Buenos Aires had already contacted the Holy See to ask for references about me.

Any cookies that may not be particularly necessary for the website to function and is used specifically to collect user personal data via analytics, ads, other embedded contents are termed as non-necessary cookies. It is mandatory to procure user consent prior to running these cookies on your website.